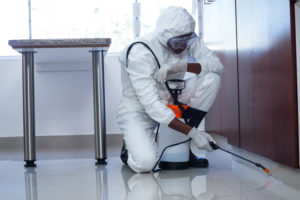 Almost everyone is afraid of spiders, and most tell a tale of a brown recluse spider bite. Although not likely, these stories show our innate fear of these eight-legged arachnids. Since spiders aren’t technically bugs, they can be difficult to control with common pesticides. The good news is that research has proven that only a couple species of Florida spiders have fangs long enough to pierce human skin.

Spiders are important and beneficial insects that suppress flying bugs like mosquitoes. True spider bites do not get inflamed or turn red in color. Spider bites will be flat, cool to the touch, and bluish in color because of the venom’s reaction with blood vessels.

Some common Sarasota spider control myths usually include the Brown Recluse, which is a spider that doesn’t even live in Florida. Most spider extermination calls we get are due to sightings of huge wolf spiders inside the house.

The Florida Wolf Spider can grow to about the size of your hand and is known locally as the “housekeeper” because it feeds on both live and dead bugs. Commonly found around doors and windows, wolf spiders can be very aggressive; so approach them with caution, or they will leap to attack. Most of the time, these large spiders hide between the screen and window or patio door waiting for a meal to ambush. Awesomely quick, they pounce on unknowing pest bugs like carpenter ants and cockroaches. Many times, they are seen around windows because bugs that are trapped inside have died on the window ledge trying to get back out, and the wolf spider eats from this constant buffet.

Brown Widow Spiders are the most common Florida widow spider and are found around doors and windows. They’re easy to find because their egg cocoons look like spiked balls. The Brown Widow Spider has the same amount of toxic spider venom as the Black Widow, but is mostly docile. It would be extremely rare to get bit by a Brown Widow Spider. 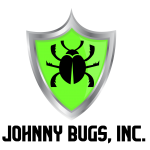 The Black Widow Spider, on the other hand, will not think twice about biting you. Black Widow spiders are aggressive when disturbed, and they are common in garages and storage sheds of South Florida. This spider is most likely found hiding behind boxes and stored items. This highly venomous spider is easily recognized by its red hourglass-shaped marking on its abdomen.

False Widow Spiders are abundant in landscaping and bushes outside the house. Like Black Widow Spiders, they also have a red marking on their abdomen, but are harmless. They are often mistaken for the Black Widow. Rest assured, real Black Widow spiders will not be sitting out in plain sight. They are always hiding in an undisturbed area.

Very common in our area, these guys are also called crab spiders and make beautiful webs that can span ten feet across. Most of the time, they just sit in the middle waiting for lunch and are harmless to people.

The brown recluse is a spider with highly toxic venom that causes severe necrosis (skin melting). This spider is not an established pest in the Sarasota Pest Control treatment zone or in any part of Florida. The Brown Recluse spider should be respected. When it bites, you are going to have a bad day (or several) if you survive.